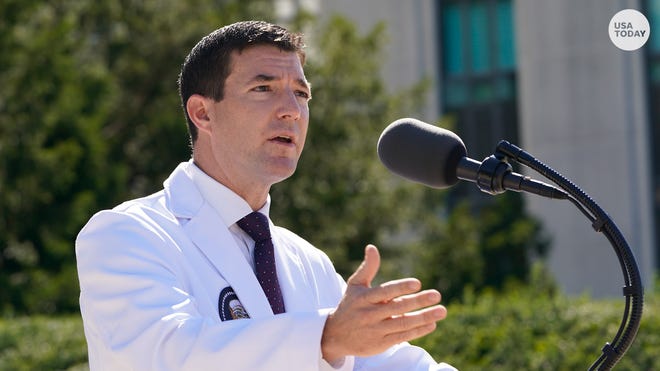 Frustrated by journalists’ questions on the front steps of Walter Reed Medical Center this weekend, Dr. Sean Conley, physician to the President, has been less than direct with his responses.

After dodging several questions about the Presidents’ care, Dr. Conley was ask if the President had ever required supplemental oxygen during his Covid-19 treatment.

“If you actually think about it, it’s really impossible for me, or any of us, to know anything at all. You know what I mean? Like, what is knowledge? Are these actually my hands? Do any of you standing in front of me actually exist? Am I the only thing that is real and everyone and everything around me is just some sort of elaborate simulation?! Is this a test? Is my wife even real? Is GOD testing me!? I bet I could strip down naked right now and trot around gobbling like a turkey and it wouldn’t even matter would it? Does anything matter? What do you people want from me?!” exclaimed Dr. Sean Conley.

When asked about oxygen saturation levels and if the President’s scans revealed any lung damage, Dr. Conley spelled the word “Solipsism” with increasing hostility and told the journalists to “read a goddamn book.”

Correspondents from various news outlets reported that the press conference was “conflicting,” “confusing,” and “highly concerning.” Many were left with more questions than before the conference began.

One correspondent asked if Dr. Conley was okay and wondered if someone had been hurting him.